22 April to 27 June at the Bridge Theatre 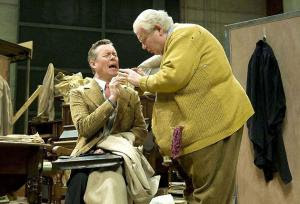 The first review of "The Habit of Art" has appeared, even while the play opens. The honour goes to the Independent. Paul Taylor has a very favourable review of the production and the actors. About Alex he says: "the inset drama is set in 1972 and stages an imaginary meeting, after a gap of twenty-five years, between Auden and his erstwhile collaborator, friend and psychological protégé, the composer Benjamin Britten. The latter is excellently portrayed in both his comic bassoon-up-the-bum inhibitedness and his tragically recessed self-repression by Alex Jennings who also plays his portrayer Henry, the kind of gay man that “trade” might call “a bit of neat”."

Full review: The Independent
Posted by jolande at 9:16 pm