A tale of seductive women and philandering men, of passionate affairs and spiralling debts, Cousin Bette paints a vivid portrait of Paris in the 1830s and '40s. It's a city full of temptations, in which money is king, morals are loose and the appeals of the virtuous are usually in vain. In the midst of it all sits a poor relation, Cousin Bette, like a spider in her web. Fuelled by bitterness and jealousy, she is determined to weave destruction into the lives of her extended family, the socially superior Hulots.

With her friend and accomplice, the beautiful Madame Marneffe, Bette sets out to manipulate events so that men are brought to their knees and their wives to despair, and she attains the power and prestige she seeks.
Cousin Bette was written in less than a year, in serial instalments, often only completed just before the deadline. Within its pages, Balzac conjures a kaleidoscope of characters from all walks of life, chronicles the rise of a grasping bourgeoisie and tells a gripping tale of jealousy, passion and treachery.

Many thanks to Jen.
Posted by pennyforyourdreams at 9:27 pm No comments:

Behind the Scenes at NT Live

The twitter feed for NT Live (@ntlive) has a few backstage pictures. None of the cast unfortunately.

The all important typewriter:

One picture from the broadcast truck midway through the play:

Posted by pennyforyourdreams at 1:59 am No comments:

Unfortunately I was unable to attend the live performance of Collaborators a couple of weeks ago due to illness, but I was able to get a ticket to see the NT Live cinema broadcast of the show this evening.

The play is set 'in the round', but not actually in the round, the set is like two islands connected by a corridor of stage.  This means that there is one pocket of audience marooned on one side, but it's an interesting set.

It's 1938 and Bulgakov lives in a cramped Moscow apartment, so cramped they have a lodger living in the kitchen cupboard, he wants to stage his long gestated Moliere play, but it's been banned.  Then he's offered a choice by the secret police, write a celebratory play for Stalin's 60th birthday and get the play reinstated...

Bulgakov is first introduced in his vest and long johns hopping out of bed to investigate the loud knocking from his kitchen cupboard, as he approaches, Stalin leaps out and chases Bulgakov around the department.  This is of course a recurring nightmare and not reality. Also Bulgakov isn't well and his wife (the excellent Jacqueline Defferary) drags him to an overworked and slightly libidinous doctor, who eventually diagnoses nephrosclerosis, a terminal disease.  Then to make matters worse he's coerced into writing a play for Stalin's sixtieth birthday by the secret police, an avuncular, yet cruel Vladimir (Mark Addy) and his largely silent subordinate (Marcus Cunningham).  Only after a trip to the wood panelled execution room and veiled threats towards his wife, does Bulgakov reluctantly accept the commission. 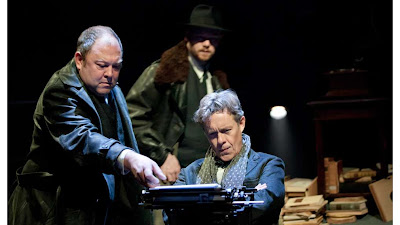 He has difficulty starting the play and eventually he gets a call from someone unknown to meet him in a secret room beneath the Kremlin.  The unknown voice is, of course, that of Stalin who limps in smiling.  Simon Russell Beale makes Stalin both oddly buffoonish, yet in a heartbeat his face hardens and you can believe that he's a man capable of the utmost cruelty.  Stalin begins to dictate what he'd like Bulgakov to write: a lurid melodramatic story of his rise from humble cobbler's son to dictator. Bulgakov can't keep up with Stalin's fast pace and Stalin ushers Bulgakov to the other side of the table and begins to type the play up himself to save time. The play is interspersed with snippets of Stalin's play, which is in fact quite a clunker.

On the next occasion Stalin is late for the writing session and blames affairs of state. He's brought a pile of paperwork with him and exhorts Bulgakov to attend to it. Bulgakov capitulates and writes an innocuous comment in red pencil on the steel production report: 'make more, or else'.  At the next session he's amazed to find that production has increased by over half. Then when Bulgakov reads a report that some members of the Communist party have been conspiring to murder Stalin, his somewhat bland and inexact 'make further enquiries' has a devastating impact. There is a mounting sense of terror, there are suicides, his lodgers are snatched from the street by the secret police and Bulgakov begins to feel like an apologist for Stalin's actions and feels the corrupting influence of absolute power. 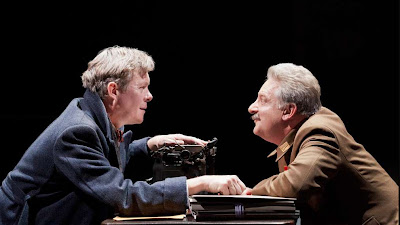 The performances are uniformly excellent and well characterised, from the small role of Sergei (Pierce Reed), the cupboard dweller, to Mark Addy's Vladimir. Sergei  is a slip of a thing, dressed in well worn work clothes and Mark Addy as Vladimir impresses.  Simon Russell Beale is of course fantastic as Stalin; he's at times funny, but then flips to being capricious and megalomaniacal.  His soft West Country burr makes him seem more cuddly than he seems.

Alex plays Bulgakov and, what many of the reviews failed to mention, he's on stage for the entire performance; he is the steady centre of the play, the character around whom everything else revolves. He's dressed in well worn clothes, that are neat, but shabby, his greatcoat is just slightly too big for him, an indication of his illness.  He's principled, kind, generous and intelligent, he wants to refuse yet his love for his wife means that he can't refuse the commission.  When he begins working with Stalin, he's afraid and wary, calling him Sir instead of Joseph, but as he relaxes, it becomes 'Joseph'. His apartment now has heating and hot running water and Bulgakov gets a sharp new pinstripe suit and his own personal driver.

Alex really has to drive the play along and he does so in an unshowy and expert way, his performance isn't selfish, his role doesn't over shadow anyone else and he's a generous enough performer to allow the lions share of the laughs to go to other characters.  John Hodge's play is very good, a small dialogue between Vladimir and his wife tells us so much about his social status and his sub-plot about the writer Grigory (an intense William Postlesthwaite) is woven with care into the play.  The direction (by Nicholas Hytner)  is superb, the play is well paced and structured. If I had one criticism, it would be that the play is so generously stuffed with ideas that the heart and emotion between Bulgakov and his wife is a little swamped.

The NT Live experience is different to a theatre experience, for one, you are are gifted with a plethora of close ups of the actors, so close you can see the tears about to spill from Yelena's eyes and mad glare that replaces the avuncular look on Stalin's face.   It's a treat to be able to see the actors in such close up and the camera positions and direction were very good.

I hope that everyone who would like to see the play gets to see it.  I heartily recommend it and I'm hoping to see it again in the Olivier (if I can get tickets).
Posted by pennyforyourdreams at 12:05 am 2 comments:

The NT live cinema broadcast is tonight at 7 pm GMT. Is anyone else going?

To celebrate the month of December the National Theatre is having a month of giveaways and competitions and today is the turn of Collaborators: John Hodge’s darkly comic new play Collaborators broadcasts live tonight around the world with NT Live . We’re giving away digital programmes to the first ten people to tell us which Bulgakov play was staged in 1926 at The Moscow Art Theatre, and boasted Stalin as a fan?

BONUS: The first 5 people to also tell us which of Bulgakov's characters was inspired by his third wife Yelena Shilovskaya will win a pair of tickets to see the play live in the Olivier Theatre in May, 2012. Email ntcheer@nationaltheatre.org.uk with your answers. Last entries 4pm today –winners will be notified by 6pm. Good luck.
Posted by pennyforyourdreams at 3:28 pm No comments: