Featuring @annobyrne, Alex Jennings and Robyn Nevin, Octavia is back to give a behind the scenes look at her groundbreaking acting techniques. #myfairlady #myfairladyaus #julieandrews #acting #musical | Instagram takeover with @zoyfrangos 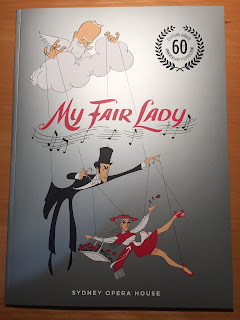 Jen went to see "My Fair Lady" in Sydney and sent this review:

This is an elegant production directed by Julie Andrews, who initially played Eliza Doolittle on Broadway. It has splendid production values and strong performances. The cast includes rising star Anna O’Byrne as Eliza and a who’s who of Australian theatre (Reg Livermore, Robyn Nevin, and Tony Llewellyn-Jones).

Alex has superb comic timing as Higgins, a prickly and peculiar character. I thought he brought a lot of laughs with his enunciation, singing and dancing in songs such as “Why Can’t the English?”, “The Rain in Spain” and “A Hymn to Him.” He also really connected with the audience and elicited sympathy in the more serious and reflective song, “I’ve Grown Accustomed to Her Face.”

My Fair Lady recently broke a box office record (most tickets sold for a production at the Sydney Opera House), which would suggest that limited tickets are available until it closes 5th November. If you are able to get to Sydney by then, I would recommend booking a ticket to see Alex in this entertaining and fun show!

Thanks Jen!
Posted by jolande at 3:16 pm No comments:

Posted by jolande at 3:16 pm No comments: