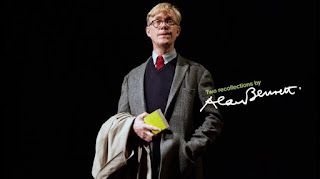 The NT have published some pictures of Alex as Alan Bennett in Hymn. They are on the NT website.
Posted by jolande at 4:29 pm 1 comment:

The Telegraph has an interview with Alan Bennett at the National, which refers to the two productions Alex is working on. A nice picture of the two Alan Bennetts: 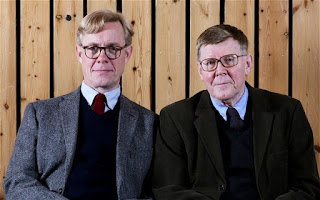 "Five minutes later, another Alan Bennett walks in. He is taller, blonder, more youthful. “Oh good, they’ve made you a bit more rumpled,” says the first Alan Bennett to his sort-of twin. “You looked very good coming through the door.”

The second Alan Bennett is the actor Alex Jennings, who is playing the playwright in two short memoirs staged at the National Theatre to complement his new play People. In one, Hymn, Bennett’s reminiscences are set to music for string quartet by his long-time collaborator George Fenton. In the other, Cocktail Sticks, Bennett looks back on his “ordinary” childhood, and the way it has affected his writing.

When Hymn was premiered at the Harrogate Festival in 2001, Bennett took to the stage himself. Watching an actor play him is odd. “I think 'do I talk like that?’” he says. “But I don’t think of Alex as me, I think of him as Alex, though that doesn’t imply shortcomings in his performance. I don’t think you can think of yourself as somebody else.”

Because Jennings is giving a performance rather than an impersonation, his demeanour and delivery are indeed not exactly like Bennett’s. The voice has the familiar Yorkshire cadence, but it is more forceful than the author’s, which in conversation at least rises and falls as thoughts form themselves; he has a habit of letting some sentences fade away into a little “mmm”."

The full interview is at The Telegraph.

Alex plays the part of Talleyrand in Anthony Burgess' drama charting Napoleon Bonaparte's meteoric rise in the early years of the French revolution. The part of Napoleon will be played by Toby Jones, Jenny Jules is Josephine.

Thanks again, Jen!
Posted by jolande at 7:54 pm No comments:

Thanks to Jen!
Posted by jolande at 8:18 pm No comments: